The EVERDURE CALTITE System was released in 1960, after an almost ten year research and development period. During this time, the primary moisture transport systems in concrete were examined and identified, along with the reasons for the disappointing performance of previous so-called “water-proofing” admixtures.

The System was originally developed for membrane-free waterproofing of concrete basements, roofs, swimming pools and other water retaining structures.

Because water is a required component in almost all types of concrete corrosion, it was soon proven to have particular application in aggressive salt , chemical, industrial and agricultural environments, where ordinary deteriorated rapidly.

EVERDURE CALTITE is a integral Hydrophobic and Pore-blocking Ingredient (HPI) for inclusion in the structural concrete, which reverses capillary “wick” or sucking action, as well as providing a physical pore-blocking component when subjected to hydrostatic pressure. A high range water reducing compound, Cementaid SUPERPLASTET, is also used to reduce w/c ratio, as well as optimise workability.

The result is non-absorptive and moisture-impervious, inherently dry concrete, permanently protected from water ingress, and proofed against soluble salt and acid attack. 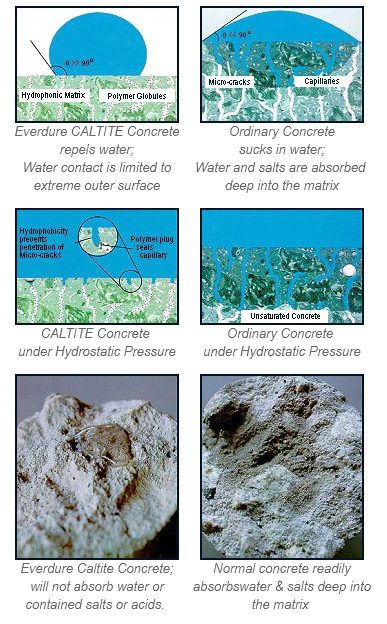 EVERDURE CALTITE has been shown to be highly effective, even in some of the world’s most severe environments. Its record of more than 50 years under conditions of extreme chloride and sulphate exposure with no significant deterioration, is unique.

EVERDURE CALTITE is the extra ingredient in concrete, (in addition to cement, aggregate and water) which profoundly reduces both absorption and pressure-permeability, as well as providing corrosion inhibition over the long-term.

EVERDURE CALTITE effectively replaces the need for coatings to the concrete or steel or other methods of waterproofing and durability enhancement.

Unsatisfactory performance and premature deterioration / corrosion of high quality concrete structures exposed to aggressive environments is a world-wide phenomenon. The cause lies in the fundamental properties of ordinary concrete itself, chiefly it’s inherent porosity. This makes it vulnerable to corrosion attack under many of the exposure conditions our structures must endure. The main limitation; even in concrete of high quality, is its substantial volume of capillaries and in-service micro-cracks. These not only allow water penetration under pressure, but also actively absorb and distribute water and moisture along with any dissolved salts, acids and aggressive chemicals into the concrete;

Conventional protective measures (ie surface treatments, coated rebar, pozzolanic materials and corrosion inhibitors) attempt to overcome the inherent deficiencies in ordinary concrete. However such methods themselves have certain practical limitations to their effective application and are not able to provide adequate durability in many field environments.

EVERDURE CALTITE directly addresses and corrects this fundamental limitation of concrete, i.e. its porosity. EVERDURE CALTITE is a time-proven, practical system which produces effectively non-absorbent, impermeable and durable field concrete. EVERDURE CALTITE has a time-proven track record of more than 37 years of successfully protecting concrete structures against corrosion, even under the most severe conditions.

A storage barn for road de-icing salt near Nottingham, U.K. was constructed using prestressed concrete panels incorporating EVERDURE CALTITE in all but two controls. The University of Liverpool is monitoring the concrete’s performance.

Strengths of over 80 N/mm² were achieved at 28 days for both concrete. In spite of the obvious quality of the control, Figure 1 shows that concrete containing EVERDURE CALTITE (HPI) was far less permeable to both air and water and had a higher electrical resistivity

Queen’s University of Belfast examined concretes modified with 10% and 20% silica fume and EVERDURE CALTITE using various in-situ test procedures. The results for concretes with a water/cementitious ratio of 0.4 are given in Figure 2.

EVERDURE CALTITE was found to be more effective in reducing surface abrasion and permeability than silica fume, the latter by a factor of ten compared with the control. EVERDURE CALTITE gave comparable compressive strength to the control while somewhat improving tensile strength.

A time-to-corrosion study was conducted in the Department of Civil Engineering on concretes with and without EVERDURE CALTITE.

The specimens were cast with reinforcing bars at 10mm, 25mm and 40mm covers and cured for 7 days. These were subjected to one week ponding with 5% sodium chloride solution followed by one week drying, before reponding with salt solution and so on for 17 cycles.

Potentials were measured with a “Saturated Calomel Electrode” (SCE). Results for 10mm covers are given in Figure 3. Reinforcement at 10mm and 25mm covers in the control were depassivated after 8 and 14 to 16 cycles respectively. The reinforcement in the EVERDURE CALTITE specimen, on the other hand, remained passive throughout the test. This indicating that chlorides had not been able to penetrate the cover thickness during the test period.

Experiments were conducted at the National University of Singapore comparing penetrability characteristics of concrete with a water/cementitious ratio of 0.4 containing a wide range of admixtures and additives from four separate suppliers.

Figure 4 summarises the pressure penetration and absorption results for silica fume, polypropylene fibre and hydrophobic concretes compared with those for the reference concretes.

Everdure Caltite – What the Industry Says…

Roads & Traffic Authority NSW (Aust.) (CTI Consultants) “The (Caltite) hydrophobic pore-blocking additive performed very well, especially at the deeper intervals where chloride reductions in excess of 97% were recorded. These results are better than those for the organo-silanes, probable due to the presence of the hydrophobic additive throughout the concrete rather than only in the outer layer as is the case for the post-applied sealers”

Queen’s University, Belfast – “Amongst the three modified concretes covered in this paper, (10% & 20% silica fume and Caltite), CALTITE concrete was observed to be the most efficient in reducing the water permeability.”

Hardman Chemicals P/L, Australia – “Our EVERDURE CALTITE Joint-free acid proof floor is now 19 years old in constant use – which compares extremely well with the life of our ordinary (concrete) earliest floors.that were destroyed in less than 9 months each.

What the Industry Says